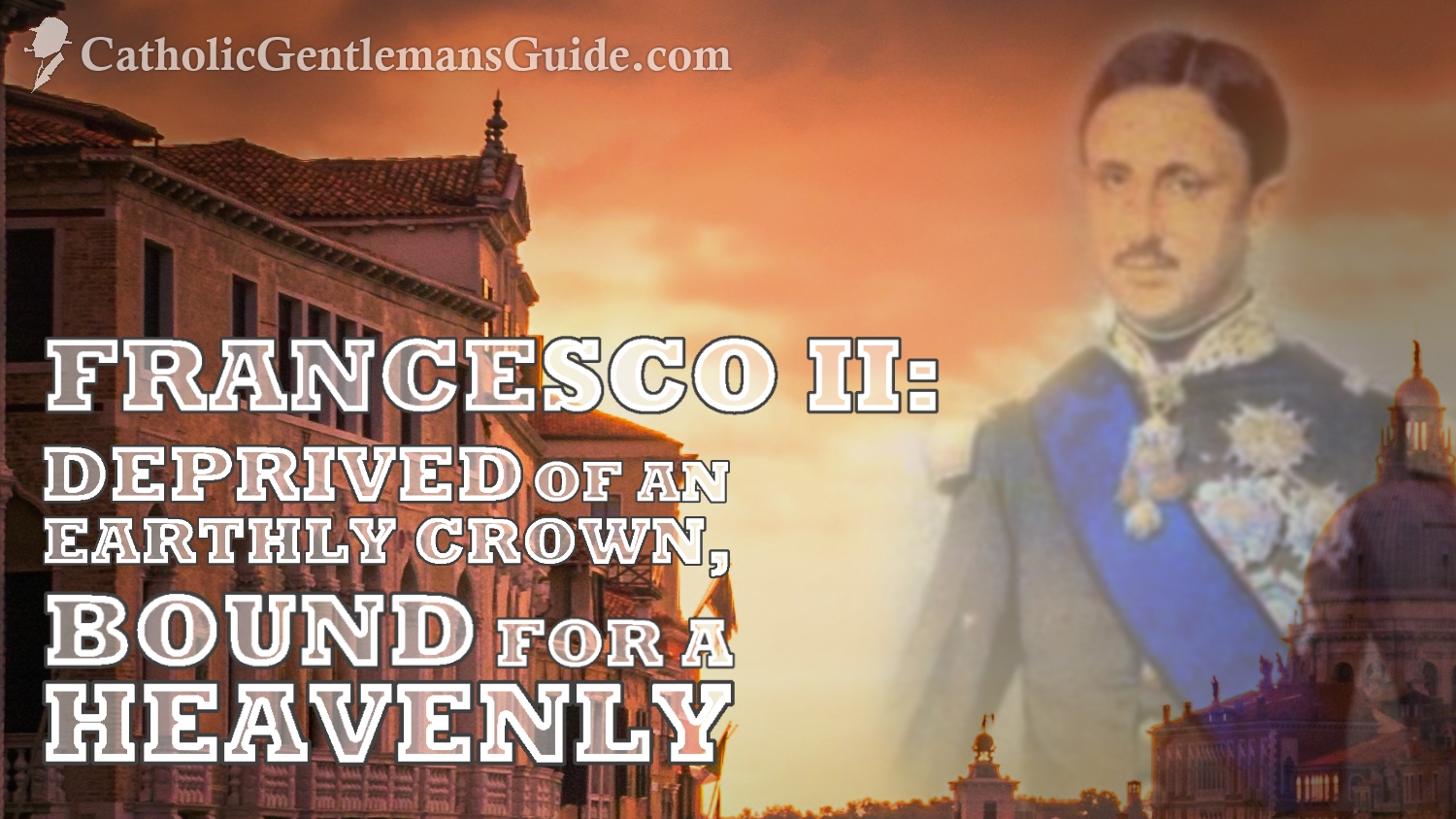 A victim of the overwhelming transformation in European political and social life of the mid-19th century and subject of ridicule for generations, Francesco II, last King of Bourbon Two Sicilies bore the reverses forced upon him with humility, piety and charity and ranks among one of the greatest Catholic gentlemen of all time.

Born January 16, 1836, Francesco II was the eldest son of King Ferdinando II and his first wife, Maria Cristina of Savoy (Saint Queen Maria Cristina, beatified Jan. 25, 2014). His pious mother had prayed many years for the gift of an heir, particularly through the intercession of Saint Philomena, and was finally rewarded for her faith, only to die 15 days after Francesco was born.

Francesco was guided by his father and step-mother, Queen Maria Theresa, and received a strong religious and general education from the Jesuit Fathers. Unlike his father, Francesco was not trained in the military arts. His father and step-mother always inspired in him love for their kingdom, duty to its subjects and, most of all, duty to God. In the faith tradition of his parents, Francesco nurtured a love for the Virgin Mary and looked to her as his true mother as he never knew Maria Cristina.

At the age of 21, Francesco requested and received the hand of Maria Sofia of Bavaria, daughter of Duke Maximilian and sister of Elizabeth, the wife of Emperor Franz Joseph of Austria.  As she was 16 at the time and had supposedly not achieved menarche, the couple did not marry until two years later, in 1859. Only 19 days later, the illness of King Ferdinando resulted in his death, and the young Francesco, age 23, and Sofia, 18, found themselves at the head of a vast kingdom in which internal as well as external forces had conspired to overthrow the Bourbon monarchy.

The couple reigned but one year, before the invasion of Garibaldi, supported by King Francesco’s cousin, Vittorio Emmanuelle of Savoy, King of Sardinia, gripped the Two Sicilies in a bloody contest. Though Francesco  did not possess the military strength or political prowess of his father, he was a man of great of  virtue, faith, humanity and sense of duty of his subjects, especially those most in need. Despite the threat of war, Francesco during his short reign made a number of considerable improvements in the kingdom: greater autonomy to local municipalities, abolition of duties and cutting taxes on flour by half; abolition of taxes on homes of the poor, reduction of custom duties, modernization of the incarceration system, reduction of bureaucracy, granting Palermo and Messina duty exemptions, establishment of a commercial court and in Catania, diminished taxes on imported foreign goods, and granting of loans to people in need.

King Francesco also created academic chairs, high schools and colleges, and established a committee for the improvement of urban Naples. He planned for the building of government steam mills which would provide free milling of grain, but was thwarted in this worthwhile endeavor by the arrival of Garibaldi. In other areas, Francesco expanded the rail network throughout the peninsular part of the kingdom and considered constructing lines in Sicily.

A champion of public health and crop irrigation, Francesco provided public funds for the building of aqueducts, straightening the River Sarno to create a navigable channel and continued work on cleaning the Neapolitan mashes, all of the above having been accomplished within one year.

Giuseppe Garibaldi, at the head of the invasion of the Kingdom of the Two Sicilies, received men, ships and, weapons from the Kingdom of Sardinia and money from Great Britain and France. Some of the money was used to corrupt top Bourbon officials, who delivered entire fortresses and military posts to the greatly-outnumbered Garibaldi forces once they landed in Sicily. The Sardinian fleet followed Garibaldi’s land force bound for Naples while Great Britain deployed a fleet in the Gulf of Naples, the capital city.

King Vittorio Emmanuelle II of Sardinia swore friendship to his cousin, King Francesco of the Two Sicilies and played down the severity of what was transpiring. Napoleon III of France publicly decried the invasion, but secretly expressed to Cavour his hopes that Nice and Savoy would be annexed to France if the French did not interfere in the Sardinian invasion.

Money provided by France and Great Britain was used to corrupt top Neapolitan officials, and upon Garibaldi’s invasion of Sicily, the kingdom’s traitors delivered entire fortresses and military posts to the invaders. Meanwhile, Sardinian General Enrico Cialdini moved towards Naples from the north and pitched battles were fought at Volturno and other places.

Young King Francesco, victim of one of the largest international conspiracies of history, and, above all, before the betrayal of his officers, government and advisers, prevented widespread bloodshed in Naples by taking refuge in the fortress of Gaeta, accompanied by Queen Sofia and their loyal troops.  At Gaeta, 20,000 soldiers loyal to the Bourbon monarchy heroically resisted a protracted, savage bombardment, lasting from November 13, 1860 until February 13, 1861. General Cialdini went so far as to bombard the injured Bourbonists and strafe the defenseless stretcher-bearers who attempted to extricate those hundreds buried alive in the crumbling fortress.

In addition to death by gunfire and explosions, lives among the military and the 3,000 citizens of the blockaded city were lost in an epidemic of typhus. In all, Bourbon casualties amounted to approximately 2,000 military and 200 civilian deaths and 829 soldiers wounded. By comparison, the invaders lost 46 dead and 321 wounded

Throughout the nightmare, King Francesco and Queen Sofia were of immeasurable assistance to their troops, encouraging those still fighting and consoling the injured. Though food supplies were dwindling, the queen often gave her own portion to the soldiers.

After a cease-fire was effected, the King and Queen left their kingdom forever, on February 14, 1861. Soldiers and civilians alike wept uncontrollably as they knelt and clutched and kissed the hands and clothing of their unfortunate rulers. General Cialdini provided a ship on which the monarchs would depart for exile in Rome, but as a final taunt it was the one named “Garibaldi.”

Francesco and Sofia hoped for a restoration to the throne, but the old Kingdom of Bourbon Two Sicilies was soon absorbed along with other smaller Italian states into a greater Kingdom of Italy, to be ruled by the Savoy family until 1946. For years, Bourbonists loyal to their deposed rulers and the Church made guerilla warfare upon the new Italian army and police forces, only to be mercilessly put down.

In Rome, Francesco and Sofia were hosted by Pope Pius IX, first in the Quirinale and next in the Palazzo Farnese. Earlier, when Count Cavour proposed to divide the Papal States, King Francesco strongly protested. Within a year of their exile – in 1862 – Francesco sent a large sum of money to his former subjects, the Neapolitan victims of a violent eruption of Mount Vesuvius.

Francesco and Maria had married in 1859, but it was nearly 11 years before they had a child. The king had a physical condition which prevented conception, but once operated on he and the queen prepared for the birth of their first born. On December 24, 1869, the Princess Maria Cristina was born while the family was in Rome. She lived but three months, and Francesco and Sofia had no subsequent children.

Deprived of their personal assets by the new Italian monarchy Savoy, which had been seized without right or justification by Garibaldi, Francesco and Sofia moved often, living from time to time on the estates of Sofia’s family in Bavaria and for a longer time in Paris. Despite reports of infidelity on the part of Sofia and her having produced a child outside of their marriage, Francesco would countenance neither divorce nor annulment.

In his later years, Francesco paid longer visits to Austrian Archduke Albrecht at the latter’s villa in Arco, then part of Austria but now part of Italy. There, Francesco, known to the populace only as “Signore Fabiani,” manifested his strongest virtues. Citizens of the town as well as intimates spoke of him as always being charitable with those in need, and no one, not even those who had plotted his earthly downfall, left empty-handed. He was regularly seen as arriving punctually for morning Mass in the Collegiate Church, standing composedly in line with area farmers to receive his Lord in Holy Communion and to kiss relics, then partaking breakfast and reading newspapers at a nearby bar. In the afternoons, he was cordiality personified in his walks about the town and never failed to return to the church at night for communal recitation of the Rosary.

About Christmas time 1894, Francesco fell ill and, probably wishing to draw attention to his state and burdening Archduke Albrecht, he moved into the Hotel Arco. As his condition worsened, he received the joy of the Last Sacraments which helped pave his way to Life Eternal. On December 27, at the age of 58, Francesco Ii di Borbone, last King of Bourbon Two Sicilies, with his wife, his half-sister Maria Immacolata and the Austrian Archdukes Albrecht, Ernst and Rainier surrounding him, breathed his last. As he had no direct heirs, the headship of the royal house passed to his half-brother Alfonso, Count of Caserta.

Only upon his death did the citizens of snow-bound Arco learn that the cordial and devout “Signore Fabiani” who had been their pleasant neighbor was in fact King Francesco II of Bourbon Two Sicilies.

The Austrian military provided a troop of escort to accompany the mortal remains of the king on a long and cold journey to Trento, where funeral services drew most of the crowned heads of South Europe in the Church of Santa Maria del Suffragio. On the trip from Arco to Trento and back to Arco, large crowds turned out to line the streets and roadways and pay their final respects to a king whose kingdom was, indeed, “not of this world.”

Francesco’s remains were interred first at Schloss Arco and later removed to Rome. His widow, Sofia, died in her native Munich in 1925, aged 85, and was buried in Rome. In 1984, the two were reinterred in the Basilica of Santa Chiara in Naples, traditional last resting place of the Bourbon family.

In 2015, two priests, Don Massimo Cuofano and Don Luciana Rotolo, and layman Pantaleo Losapio organized the Fondazione Francesco II di Borbone, for the purposes of educational and charitable works and praying for the earthly glorification of King Francesco II. The Foundation has offices in Arco and Naples, and maintains a beautiful and informational internet website at: www.fondazionefrancescosecondo.it.

Please, should anyone receive divine graces through the intercession of King Francesco II, advise the Fondazione Francesco II di Borbone.

Why Saint Joseph is Overrated

Blessed Luigi Beltrame Quattrocchi: "From the Roof Up" - Part 2

Francesco II: Deprived of an Earthly Crown, Bound for a Heavenly