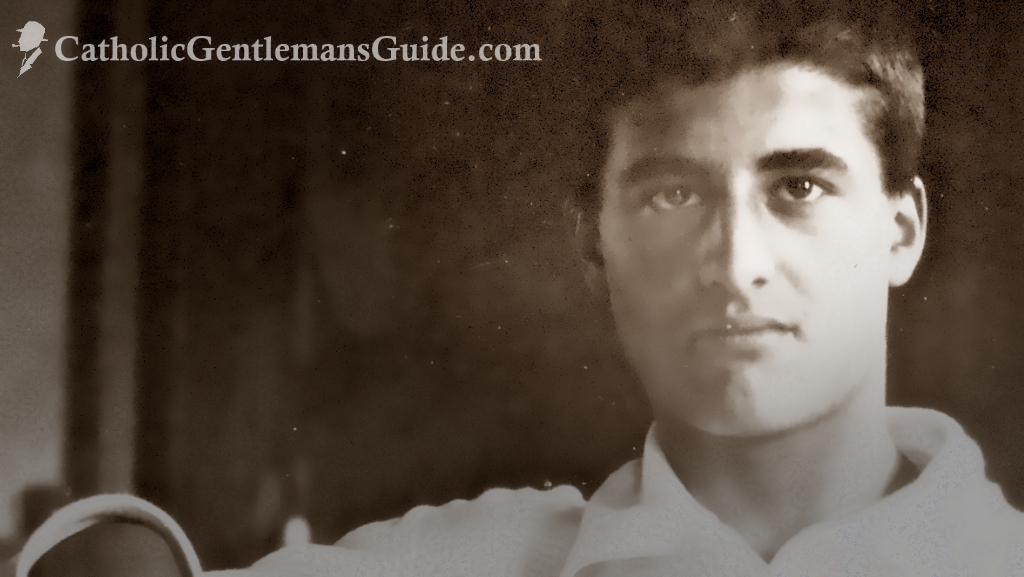 “In this trying time that our country is going through, we Catholics and especially we students, have a serious duty to fulfill: our self-formation.”

“I urge you with all the strength of my soul to approach the Eucharistic Table as often as possible. Feed on this Bread of the Angels from which you will draw the strength to fight inner struggles.”

“When God is with us, we do not need to be afraid.”
~Pier Giorgio Frassati

Blessed Pier Giorgio Frassati, the “Saint for the Youth of the Third Millennium,” is an enduring example of the true Catholic Gentleman for all times. In his relatively short life, he lived it to the fullest, enjoying sports and the companionship of people of all ages, and manifesting his deep love for Christ with selfless service to the needy and a mission to sanctify society and politics.

Pier Giorgio was born in Turin, Italy on Holy Saturday, April 6, 1901. His father, Alfredo Frassati, was the founder and director of the liberal newspaper La Stampa and a leader in Italian politics, serving as senator and later as Italy’s ambassador to Germany. Pier Giorgio’s mother, nee Adelaide Amentis, was a painter and socialite. Pier Giorgio’s life and work blossomed between two devastating World Wars, when his country was in social and political turmoil and Fascism on the rise.

Pier Giorgio’s parents were Catholics in name only, his father being described as an agnostic, and their marriage was an unhappy, often rancorous one. By the grace of God, Pier Giorgio developed a deep spiritual life in his childhood, particularly in Adoration of the Blessed Sacrament, praying the Rosary and giving all he could of himself and his resources to those in need. He remained with his parents throughout his life, hoping to lessen the tension between them and keeping the family intact. Heartbroken, Pier Giorgio even sacrificed his love for a young Spanish lady, Laura Hidalgo, whom his parents considered below their social status.

In 1918 Pier Giorgio joined the St. Vincent de Paul Society and dedicated much of his spare time between studies to serving the sick and needy. Pier Giorgio did not have a religious calling, but wanted to serve God and society as a lay person. He decided upon the career of mining engineer so he could “serve Christ better among the miners.”  In 1919, he joined the Catholic Student Federation and the Popular Party, a political organization promoting the Catholic Church’s teachings. He also helped establish a Catholic daily newspaper, Momento, based on the principles of Pope Leo XIII’s encyclical on social and economic matters, Rerum Novarum.

Although the Frassati family was wealthy, the father was frugal and never gave his two children, Pier Giorgio and his older sister, Luciana, much spending money. What little he did receive, however, Pier Giorgio gave to help the poor, even giving his streetcar fare to those in need and then running home from classes or spiritual work to be on time for meals in a house where punctuality and frugality were the law. When asked by friends why he often rode third class on the trains he would reply with a smile, “Because there is not a fourth class.” He wanted to identify with the poor in everything he did.

One day when Pier Giorgio was a child, a poor mother and son came begging to the Frassati home. Pier Giorgio answered the door and, seeing the boy barefoot, promptly removed his own shoes and gave them to the boy. At Pier Giorgio’s graduation, his father gave him the choice of money or a car; he chose the money and gave it to the poor. He obtained a room for a poor elderly woman evicted from her tenement, provided a bed for a consumptive invalid and supported the family of a sick and grieving widow. He kept a little ledger containing detailed accounts of his transactions, and while he lay on his death bed, he gave instructions to his sister, Luciana, asking her to see to the needs of families who depended on his charity. He even took the time, with a near-paralyzed hand, to write a note to a friend in the St. Vincent de Paul Society with instructions regarding their weekly Friday visits to needy homes.

Only Pier Giorgio’s beneficiaries and God knew of his selfless charity work and personal sacrifices; he never mentioned it to others.

One night while with his family in Berlin, with the temperature at 12 degrees below zero, Pier Giorgio literally gave his overcoat to a poor old man shivering with cold. His father scolded him, and he replied simply: “But you see, Papa, it was cold.”

Pier Giorgio’s parents considered him undisciplined, a hopeless student with little future. They could not understand why he prayed the Rosary so frequently, attended Mass and received Holy Communion every day and attended night-long Adoration of the Blessed Sacrament. They did all they could to emotionally deter him from his active Catholicism. Pier Giorgio remained unbroken in his faith and work, and yet was always the loving son.

In between his studies, devotions and charitable work, handsome and vigorous Pier Giorgio spent time in the countryside with friends, mountain climbing and snow skiing being his favorite sports. On these outings, the young friends – who humorously called themselves “The Sinister Ones” – enjoyed hours of fun and laughter, but likewise shared their religious inspirations and spiritual lives. Pier Giorgio’s famous motto, “Verso l’alto,” Italian for “To the heights,” meant reaching for God as well as the mountain peaks. His regular habit was to attend Mass before heading to the mountains and of visiting the Blessed Sacrament upon his return. “If my studies permitted, I would spend whole days on the mountains, admiring in that pure atmosphere the magnificence of God,” he said.

Pier Girogio also enjoyed the theatre, opera and museum visits. He loved art and music, could quote entire sections of Dante and other classical writings and, though without a fine voice, sung both religious and classical tunes with gusto and conviction.

Fear never deterred Pier Giorgio Frassati from expressing and promoting his faith in Christ. In a Church-sponsored rally in Rome, he withstood police violence and encouraged the other young people by grabbing the banner which the police had knocked out of someone’s hands. Pier Giorgio held it even higher and used the pole to block the blows. When the students were arrested, he refused special treatment that he might have received because of his father’s political position, preferring to stay with his friends. On another occasion, some Fascists broke into his family’s home at night to attack him and his father. Pier Giorgio beat them off and chased them down the street single-handedly.

In late June 1925, Pier Giorgio was afflicted by an acute attack of polio which doctors later speculated he caught from the poor and sick whom he tended. Neglecting his own health because his grandmother was dying, Pier Giorgio’s illness became too advanced for treatment. His parents only realized his suffering when it was too late. Through days of terrible and paralyzing pain, he never complained and prayed as long as he had the strength. On her part, his mother denied his friends’ and even the Archbishop of Turin’s requests to visit and comfort him. Thus deprived but ever gracious, Pier Giorgio Frassati returned his soul to the Lord he so loved on July 4, 1925. He was of 24.

The Frassatis expected their great political and social friends and some of Pier Giorgio’s circle to offer their condolences and attend the funeral. They were dumbfounded, however, when a steady stream of people totally unknown to them visited their home to pray beside Pier Giorgio’s remains, at the lines of kneeling people outside, at the streets of Turin crowded with thousands of weeping and praying people, particularly the poor, who pushed toward the unadorned coffin of their son as it was carried to the parish church of La Crocetta. Most of the poor, too, had a surprise as they learned that the young man who had given to and served them so faithfully and generously was from such an rich and influential family. It was these poor people who petitioned the Archbishop of Turin to begin the cause for Pier Giorgio’s canonization. The process was opened in 1932 and he was beatified on May 20, 1990 by Pope John Paul II. Blessed Pier Giorgio Frassati’s feast day is July 4 – the day of his death – and his body, miraculously incorrupt 88 years after his death, lies in a chapel of Turin Cathedral.

Devotion to the intercession of Blessed Giorgio and advocacy of his ideals is practiced by countless people, particularly school students and young adults, the world over. The prime proponents of the Frassati message are the Associazione Beati Pier Giorgio Frassati in Rome and FrassatiUSA in this country. Detailed information on their work may be online as well as thank of Frassati Groups which have developed spontaneously across the United States and Canada in honor and emulation of Blessed Pier Giorgio Frassati, an athlete for Christ, a man of the Beatitudes and a Catholic Gentleman par excellence.

One thought on “Witness to the Faith: Blessed Pier Giorgio Frassati”