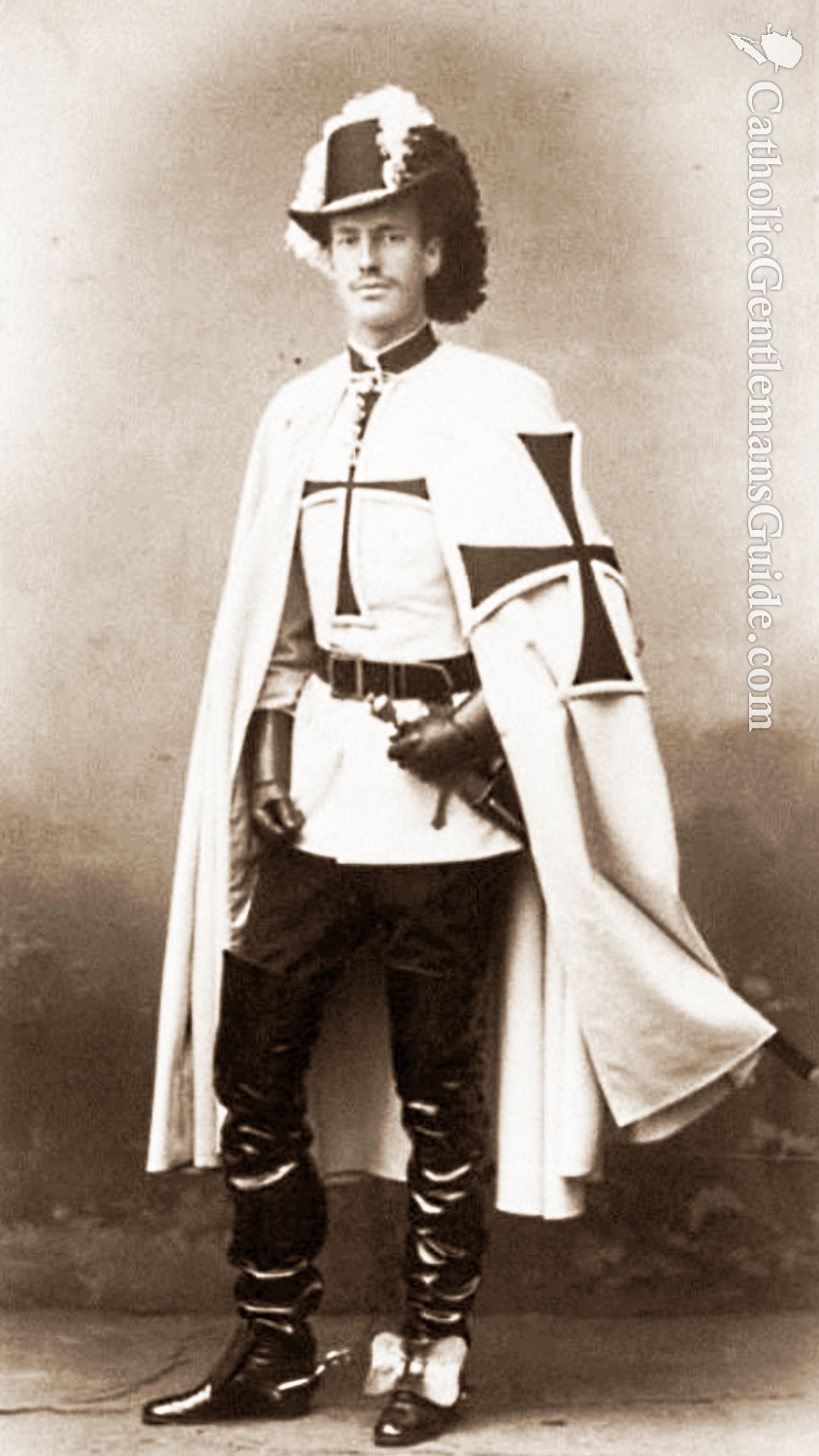 One of the last great figures of Catholic chivalry, Archduke Eugen von Habsburg served his Church, his nation and his sovereigns with admirable devotion and loyalty. Refusing to profit from the downfall of the Austro-Hunagrian monarchy, he refused the throne as well as resigned his position as the last lay-religious Hoch- und Deutschmeister of the Order of Brothers of the German House of Saint Mary in Jerusalem (the Teutonic Order).

Eugen received a well-rounded education, delivered with strictness, which was tempered by holidays at Gmund. In Vienna, he was enrolled in the Albreachpalais where he was taught languages, music, art history and the various military subjects. At the young age of 14, he followed family tradition and entered the military, joining the Tyrolean Kaiserjager Regiment and being commissioned lieutenant in 1877. One year later, a month prior to his birthday, he was invested a Knight of the Golden Fleece, the first of approximately 50 military, foreign and religious honors received throughout his lifetime. He was awarded the Grand Cross of the Equestrian Order of the Holy Sepulchre in 1907.

After his service in the Kaiserjager Regiment, he transferred to a hussar regiment and participated in a number of lengthy maneuvers. In 1882, he successfully mastered an examination allowing him entrance into the Wiener Neustadt military academy. He was the only archduke to attend the two year-long course at the academy and graduated as a fully-trained officer, as opposed to other members of the royalty and nobility who were appointed solely by reason of their position.

Subsequent appointments included army inspector and senior defense commander for the Tyrol and presumptive army commander when war with Serbia seemed evident in 1909. In 1911, Eugen retired from active military service ostensibly owing to health concerns. General Conrad von Hötzendorf in his memoirs, suggested that Archduke Franz Ferdinand, Eugen’s cousin and heir to the throne, had become increasingly jealous of Eugen and the latter may have retired as a way of avoiding conflict.

The Austro-Habsburg Empire was seen in the 19th and early 20th centuries as the preeminent Catholic nation of Europe and its ruling family, the Habsburgs, the keeper of the Faith. Eugen showed a pious nature early in life and in 1887, at the age of 23, he made his vows as a professed knight of the ancient Order of Brothers of the German House of Saint Mary in Jerusalem, commonly known as the Teutonic Order. The vows entailed poverty, chastity and obedience. At the same time as investiture, Eugen was selected coadjutor of his uncle Archduke Wilhelm, who was then Hoch- und Deutschmeister of the Order.

Upon Wilhelm’s death in 1894, Eugen was installed as Hoch- und Deutschmeister and proved one of the most capable men to lead the centuries-old Order of Catholic chivalry and charity. He founded new hospitals, increased the efficiency of the Marianer (lay sisters’) nursing services and improved their training and streamlined and expanded the Order’s archives in Vienna.

By 1911, the Teutonic Order numbered 20 professed knights bound to celibacy while enjoying a benefice of the order, and 30 knights of honor not bound to celibacy who were required to furnish monetary offerings. The revenues of the Order were devoted to religious works, and it had administration of 50 parishes, 17 schools, and nine hospitals and supported two congregations of priests and four of sisters. It performed ambulance service in time of war and paid the cost of the ambulance, for which Marianers were ambulance bearers.

When the First World War erupted over the assassination of Archduke Franz Ferdinand in 1914, Eugen immediately reported for active duty but was given a relatively minor task as patron of the volunteer war welfare organization. Four months later, he was assigned the post of commander of the forces in the Balkans, where he reorganized the badly battered 5th Army.

In 1915, Eugen was promoted to Generaloberst and assigned the command of the Southwestern Front against Italy. With his headquarters at Marburg (Maribor), his theatre stretched from the border with Switzerland to the Adriatic Sea. As the Austro-Hungarian force faced a greatly larger Italian one, Eugen’s tactic was defensive.  During the First Battle of the Isonzo, he Eugen traveled back and forth along the front, participated in many conferences, streamlined supply movement to the front, appeared on the front lines and encouraged the troops, gaining great popularity. Especially endearing was his address to the troops on the birthday of Emperor Franz Josef in 1916, which may be heard in remastered format on YouTube.

In 1917, prior the attack from the South Tyrol Eugen was named army group commander of the 11th and 3rd armies, making his headquarters at his cousin’s, the Graf von Bozen und Maurer, estate near outside Bozen (Bolzano). Despite early success, the Austro-Hungarian attack had to be broken off in response to the Russians’  Brusilov Offensive from the east and the resultant transfer of troops to face the Russians. Eugen has to transfer increasing numbers of his troops to the beleaguered Isonzo Army, thereby depleting himself of reserves. He never considered withdrawal, however

Eugen was promoted to Field Marshal in late 1916,  and in early 1917 resumed command of the Southwest Front. Recognizing the Caporetto offensive as the last chance for victory for the Central Powers, he threw all of his energy into the task. Eugene, who was normally lenient with his troops, pushed them hard in this encounter and confusion arose in the issuance of orders.

Despite objections of the chief of the general staff, Generaloberst Baron Arz von Straussenburg, Emperor Karl (Blessed Charles of Austria) released Eugen from active service in late 1917 and the Southwestern Front command was ended. Eugen’s release was made on account of the Emperor’s personal taking command and the army’s offensive on the Piave.

Eugen continued to enjoy respect and admiration at war’s end in 1918, and the idea of installing him as regent upon the abdication of Emperor Karl was considered. A man of high principles, Eugen, refused, as he would not accept such a position without Karl’s blessing.

Following the war, Eugen devoted more time to the work of the Teutonic Order, charitable relief work for the war-stricken population of Austria and other works of mercy.  He lived for a while in Lucerene and later in a modest hotel in Basel.

When the new government of Austria attempted to seize the considerable assets of the Teutonic Order as property of the Habsburg family in 1923, Eugen nobly voluntarily resigned his position as the Hoch- und Deutschmeister and, thereby, the Order retained its possessions. Eugen was the last hereditary grand master of the Order and it became a solely religious order of priests, brothers and sisters. The chivalric aspect of the Order was revived in 2000 under a separate Hochmeister.

In 1934, Eugen moved into the Order’s home at Gumpoldskirchen near Vienna. He no longer believed in the possibility of the Habsburgs being returned to power, yet participated at monarchist and veterans’ functions and placed himself again at the service of the Habsburg family.

Following the Anschluss of Austria to Nazi Germany in 1938 the Teutonic Order was dissolved and its possessions confiscated. Eugen held the admiration of both the Axis and Allied powers. Likely with the intervention of Hermann Göring and other senior Nazi military figures, he survived the Second World War in a rented house at Hietzing. In 1945, Eugen returned to the Tyrol and received through the French occupying forces a small rented villa at Igls.

On 21 May 1953, the whole of the city of Innsbruck celebrated Eugen’s 90th birthday. He lived for more than a year longer, dying on December 30, 1954, in the Teutonic Order house at Meran, surrounded by the brothers of the Order from Lana. The funeral services in Innsbruck on  January 6, 1955 were opportunity for widespread mourning and tributes, with massed thousands lining the route of the cortege. Eugen was buried in St. Jakobskirche, next to Archduke Maximilian III (1558–1619).