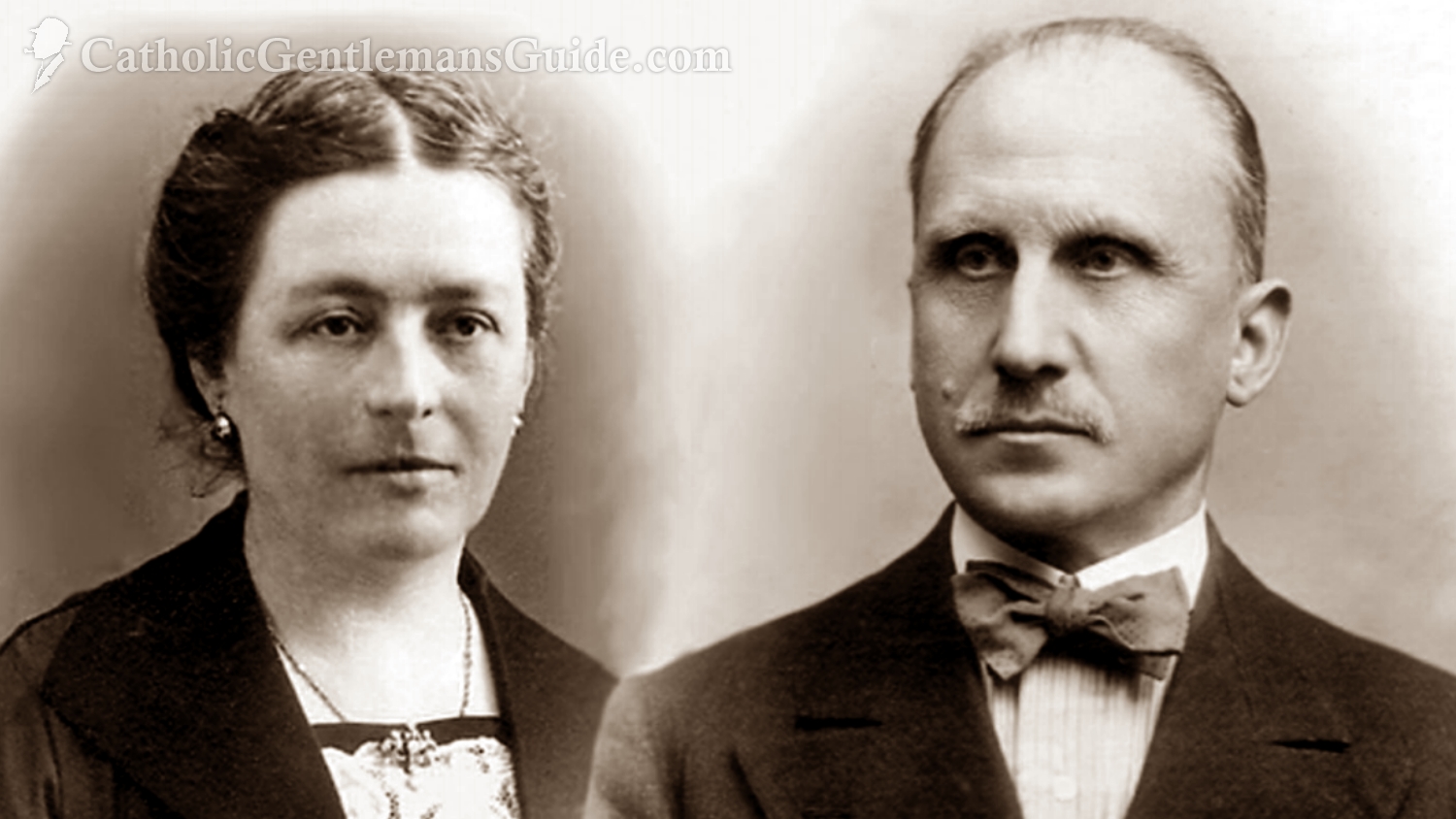 LIVING “FROM THE ROOF UP”

In her moving work Radiography of a Marriage (1952), Maria wrote:

“Since the birth of our first son, we began dedicating ourselves to the children, forgetting ourselves…. In order to love our children more, we tried to better ourselves by correcting our shortcomings and improving our characters…. We both felt the tremendous responsibility in front of God, Who had entrusted the children to our care and of our country that expected loving citizens…. Educating children is the ‘art of all arts’ and brings along serious difficulties. But one thing is certain: as two bodies in one, we both aimed at their best, ready to avoid everything that could harm them; this implied some personal sacrifices. The joy of dedication to our children compensated everything, because that joy was God’s joy.”

Family life was never dull in the Quattrocchi home in the Via Depretis in Rome. Relatives and friends recall the “noisy joy” which characterized the Quattrocchis, especially at mealtime. The family enjoyed sports and trips to the seashore and mountains.

In addition to Luigi’s legal profession and Maria’s career as a professor and catechist and her publication of many works on education and family life, the Quattrocchis were members of The Third Order Regulars of St. Francis of Penance, involved in various marriage and family apostolates and service to the poor youth of Rome. They founded the Associazione Scouts Cattolici Italiani, the Italian scout organization; the Azione Cattolica, the largest Catholic lay organization in Italy; and UNITALSI, an association which assists the infirm undertake pilgrimages to Loretto and Lourdes. The Quattrocchi sons were Scouts in their youth and, after their ordinations, served as Scout chaplains.

Luigi and Maria earnestly reared their four children to love and live the spiritual life. They often told friends and relatives that they wanted their children to appreciate life “from the roof up,” that is, concentrating on Heaven. For more than 20 years, the Quattrocchis received spiritual direction from two renowned prelates, Father Pellegrino Paoli and Father Matheo Crawley. The family, led by Luigi, prayed the Rosary together each evening after dinner, and the image of the Sacred Heart of Jesus solemnly enthroned by Father Crawley held the place of honor on the dining room mantel. The Quattrocchis held a family holy hour on the eve of the First Friday of each month, practiced night vigil prayer, attended weekend retreats and pursued graduate courses in spirituality. Luigi’s profound devotion before the Blessed Sacrament and his love of assisting visiting priests celebrate Mass in the family home were remembered with great emotion by his children.

For the Quattrocchis, the home was a “little Bethany” where love for one another in God reigned supreme. Maria was renowned for her hospitality and here her spirituality was evident, in that gossip, resentment and bitterness were banned. In 1928, she and Luigi acquired property at Serravalle on which they built a house, complete with small chapel where, by special permission, they were able to enshrine the Blessed Sacrament.

Youngest daughter Enrichetta stated that her parents were, obviously, not immune to disagreements between themselves, but they never allowed the children to witness such. Luigi and Maria solved problems through discussion and always displayed a spirit of harmony and unity. Luigi’s intuition of Maria’s concerns was proverbial. Once, on a business trip away from Rome, he stopped in Naples to telegraph Maria, saying he knew exactly what she wished to discuss with him.

Younger son Cesare Quattrocchi recalled of family life: “There was always a supernatural, serene, and happy atmosphere in our home, but not excessively pious. No matter what the issues facing us, they always resolved it by saying that it had to be appealed ‘to Heaven.’ “

Filippo, the older son, stated: “The aspect that characterized our family life was the atmosphere of normality that our parents created in the constant seeking of transcendental values.”

Three of the four Quattrocchi children chose religious vocations: Filippo became Rev. Tarcisio, a diocesan priest, and Cesare entered the Trappist order of Brothers and became Rev. Paolino. Their sister Stefania recalled: “When the two boys left the house, it left a huge emptiness. Papa was the one who felt it the most, to the point of physical illness.”  However, this grief passed, and Maria later wrote to her sons: “Thinking of you is for me, after the Mass and Communion, my only rest, the single radiant refuge in my soul blessing the Lord.”

In 1927, Stefania entered the Benedictine convent in Milan and took the name Sister Maria Cecilia. The youngest Quattrocchi – Enrichetta – recalled: “My sister’s departure made a violent tear in Papa’s heart. I can still see, more than 70 years later, the silent, discrete tears of my father on his knees, while on the other side of the grille, the ceremony of his daughter’s taking of the habit took place.” Of the choice between religious vocation or married life, Maria Quattrocchi stated: “All states of life, provided they are lived under the sweet hand of the Divine Will, are noble and holy, being effective means of arriving at the goal [holiness].” She said “it’s certainly a great and sublime vocation” if young people choose marriage, but added that that path can be difficult as well. Enrichetta, for whom all of the family had prayed so fervently during Maria’s difficult fourth pregnancy, selflessly lived the Fourth Commandment in dedicating herself to the care of her parents throughout their remaining years.

During World War II, both of the Quattrocchi sons served as chaplains in the Italian Army. Maria, who had served as a volunteer nurse during the Ethiopian War, served again in this capacity. Their home in the Via Depretis was a beacon of faith and charity during the frightful German occupation of Rome. No one suffering from the effects of the occupation and knocking at the Quattrocchis’ door was ever turned away or refused food. Their home ever remained open to refugees, including Jews, for whom they went to heroic lengths and would have suffered terrible consequences if detected by the German authorities.