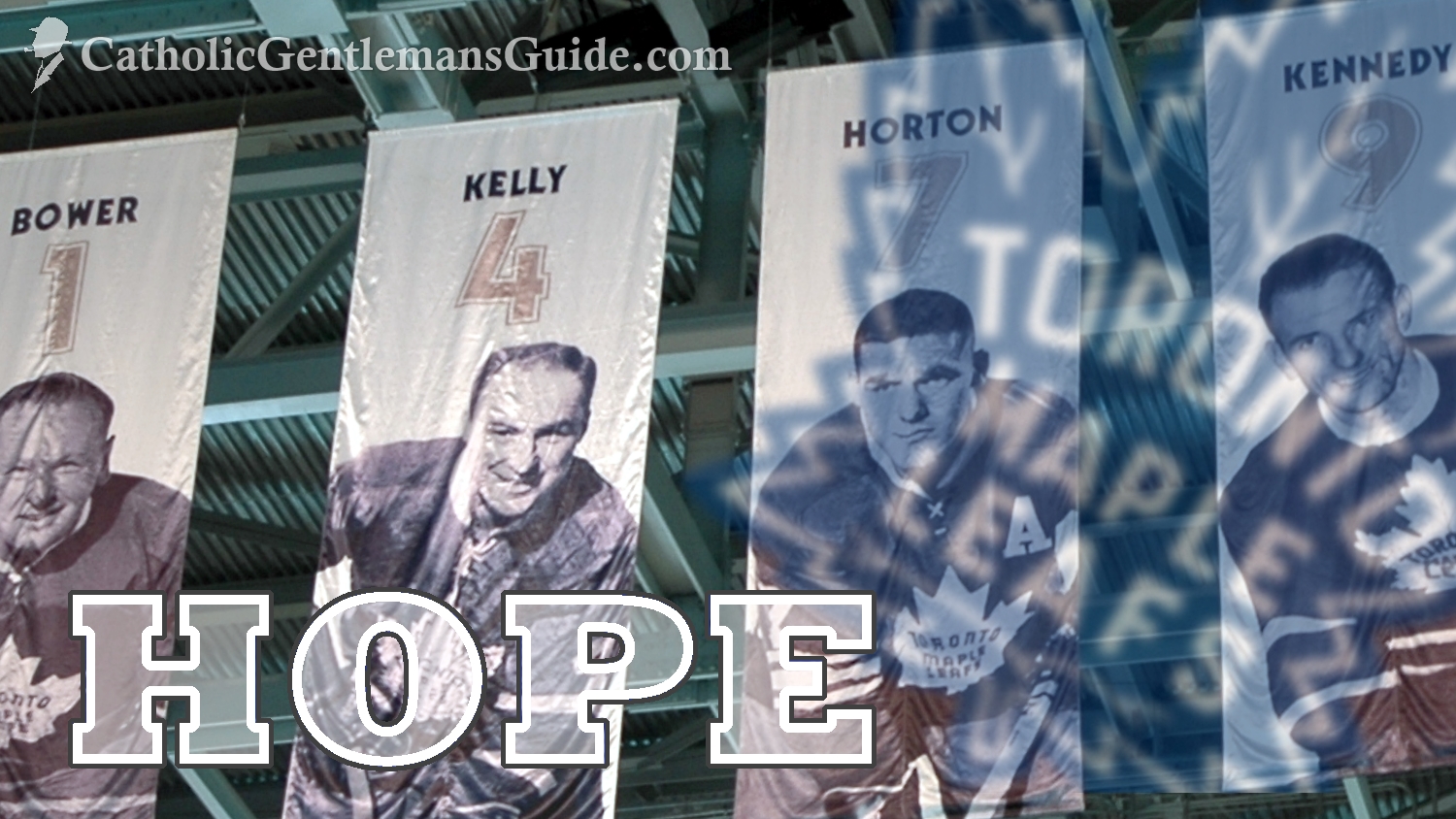 I wasn’t born into a hockey family. (I know, I’m Canadian. It’s supposed to be in my blood, Eh?) It wasn’t until about grade 6 that I began taking an interest in hockey. Naturally, my favorite team became the Toronto Maple Leafs. And from the young age of 10 or 11, I began to really learn the virtue of Hope.

We all have hopes and dreams, and I think we can all connect with the concept of hope rather well. In fact, we might hope for a great deal of things (… A Stanley Cup for the Leafs for instance). So if our hopes are so abundant and seemingly ordinary and non-religious, why is Hope, this Manly Virtue, elevated to the status of a Theological Virtue; what’s the connection between my day to day hopes and Theological Hope; and why is Hope important to us as Catholic Gentlemen? (I hope you keep reading to find out!)

Along with Faith and Love, Hope is yet another one of those theological virtues. You’ll often hear this to mean that the theological virtues are called such because they have God for their object. In other words, Hope in its truest and extraordinary sense has God (no, not the Leafs) for the object in which the Hope is placed. It is the virtue by which we long for and desire fulfillment and happiness, Heaven and Eternal Life. In Hope, we cling to God and His promise to be our strength through the Holy Spirit. (CCC 1817)

So how am I able to take the hope I learned in the ordinary hockey sense and direct it toward Theological Hope? Well, in a similar way to how an NHL player first starts with lots of practice as a kid, so too, we can actually strengthen our Extraordinary Hope by practicing hope in ordinary ways. In other words, the mere practice of noble ordinary hope can help us draw some parallels with the ideal virtue of our Hope in God. So let’s draw some parallels!

God has placed the desire for happiness in the heart of every man (CCC). Hope is the virtue by which we respond to that desire for happiness and long for it. I can tell you, in former years when the Leafs use to regularly clinch a playoff position, making the playoffs, and then winning a playoff series brought immense happiness, because it was a step closer to the ultimate goal (Stanley Cup). I would hope for the happiness that came through the passing of each vital step toward the goal. And I longed desperately for the ultimate goal. Even though I have never experienced the joy of being Stanley Cup Champions, I can still strongly relate to what Hope in God is about. It is seeking happiness by looking toward the ultimate goal. In the world of ordinary hockey, this is the Stanley Cup and finding a temporary happiness that will die (until it can be experienced again after, oh, let’s say 48 years or so…). Theologically though, this ultimate goal is Eternal Life, God Himself, and the Eternal Happiness that satisfies the original desire of our nature forever!

Next, Hope keeps Man from discouragement (CCC). Season after season, the Leafs let fans down. The Leafs always set us up for disappointment. Either by failing to make the playoffs, or being eliminated in the first few rounds. Yet, season after season, hopeful Leafs fans consistently ensure that Toronto merchandise sales are above that of any other hockey team. Moreover, guess which team and which fans take the butt end of the most hurtful jokes? That’s right, Toronto Maple Leafs. Rival fans are viciously Anti-Toronto. Sadly, to the ignorant masses, the Maple Leafs are just a joke. Our hope tells us otherwise. Despite discouragement coming from every angle, Toronto fans continue to show faith and hope in the Leafs. Being a Leafs fan means you learn to hope in the face of discouragement.

Similarly, hope sustains Man during times of abandonment (CCC). How abandoned would you feel if, after nearly half a century, you never won the cup? The day is fast approaching when no-one will remember that glorious day back in ’67. And ever since then, Toronto fans have been hoping in season after season, but have been abandoned by their team. Of all teams who have won a Stanley Cup, Toronto’s drought is by far the longest! Yet, this hope in spite of abandonment remains strong!