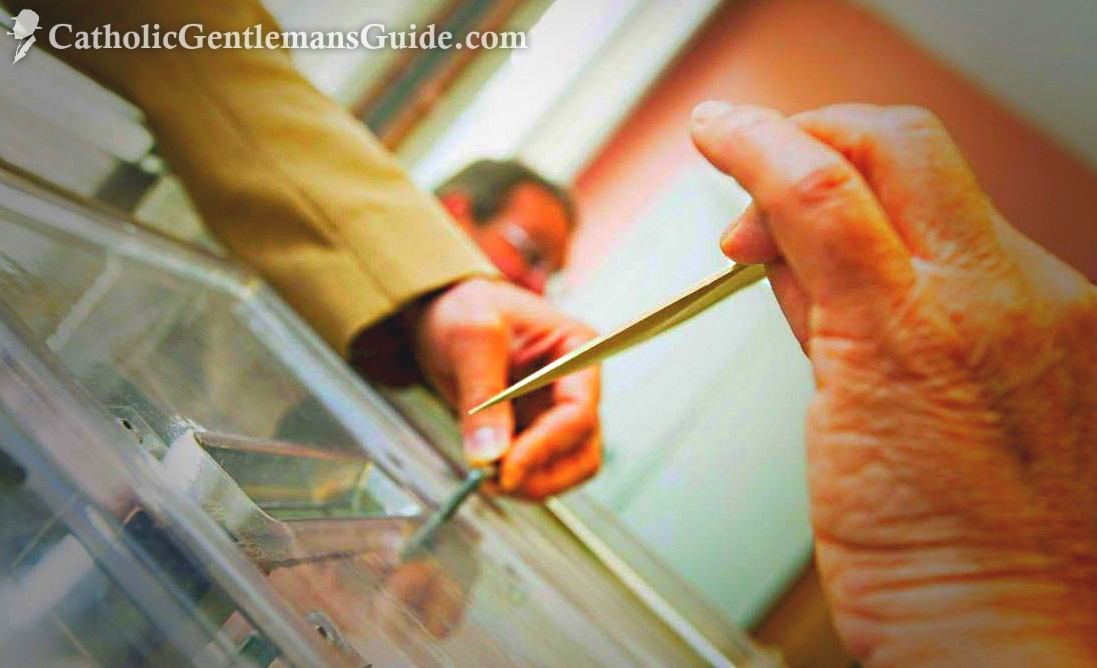 If democracy has one advantage over other forms of government, it is that we as Catholic Gentlemen have a small, but significant, part to play in having a say in how our governments should rule and what issues they should be addressing. In fact, voting is one of our essential obligations and responsibilities as Catholic Gentlemen in an increasingly non-Catholic world. Our goal is not to create a Catholic religious state nor make governments favor Catholic citizens over others, but our goal is to insist that our governments always hold to those “non-negotiable ethical principles, which are the underpinning of life in society”.1 In voicing our vote, we strive to influence our political structures to embody truth and justice for the greater benefit of ALL of us.

The Catholic Church does not tell us who we should vote for. It cannot bind us to vote for a specific candidate or political party. However, we are bound to follow our conscience, which binds us to follow the Church’s moral and social teachings. It is through these teachings that we can arrive at the principles that are used to make informed and prudent decisions when it comes to voting. Equipping ourselves with the Church’s guidance will ensure that any voting situation can be approached in a morally responsible way.

What is the Primary Purpose of Government? – The correct answer to this question will always influence the choice of any voting Catholic. Although our politicians and governments may be oblivious to this reality, the fact remains that governments are in place to serve and protect the common good, human dignity, and rights of human persons.2 All we must do is exercise our prudential judgement to determine which candidate is best suited to achieve this purpose. It goes without saying that many of our society’s laws and social perspectives don’t truly serve the common good, nor do they attempt to acknowledge the fundamental rights of all human persons that stem from our inherent human dignity. It is a candidate’s policy towards these types of issues that must be at the forefront of our minds as we enter the voting station.

Abortion – Any Catholic resource on voting will always list Abortion as the primary issue of importance when determining a candidate to vote for. Catholics are obsessed with abortion. But we have to be. The Catholic teaching on abortion is that it is always objectively wrong, for it is the destruction of innocent human life and violates both human dignity and human rights (and the common good for that matter).  Saint John Paul II reiterated the Church’s teaching that the right to life is our most basic and fundamental right, and is the necessary condition for every other personal and human right. As such, any candidate who proposes pro-abortion views excludes himself from a Catholic Gentleman’s vote. It is also worth mentioning that a Catholic is permitted to vote for a candidate who proposes incremental restriction on current abortion laws, so long as we still intend to see the rights of the unborn unconditionally upheld in time.

Assisted Suicide / Euthanasia – For the same reasons as abortion, Assisted Suicide is also an issue of primary concern because of it’s direct attack on human life and human dignity. This is an emerging challenge we continue to face in our own times and it’s widespread acceptance is yet another sign of our culture of death. Again, just as with abortion, a candidate who supports Assisted Suicide excludes himself from a Catholic Gentleman’s vote.

Other Issues – Depending on the political atmosphere, a Catholic Gentleman may also need to consider: Human Cloning, Embryonic Stem Cell Research, certain Fertility Treatments, Redefining Marriage, Population Control, Sterilization, Contraception, War, Genocide, Death Penalty, Education, Environment, Economy, the Family, and others. Some of these issues may or may not be on the table at any given time. Of course, we must recognize that not all of these issues, such as war or the death penalty are inherently wrong, while other policies, such as those on education, environment, and economy have a lot more leeway when it comes to Catholic opinion. It is up to us to be familiar with the Catholic moral teaching on each of these issues and let it guide our judgement with prudence. Note that all of these issues do not carry the same moral weight. And don’t forget that no issue should supersede the pro-life issues. For example: If a candidate has a moral environmental or immigration policy that will benefit the lives of millions of people and serve the common good immensely, it still will not outweigh his stance in support of abortion. Two great sources of learning the Catholic teaching on these issues are the Catechism of the Catholic Church and the Compendium of the Social Doctrine of the Church.

Determining the Candidate – Gone are the days where we vote according to our family’s political tradition.  And to be honest, it really isn’t about political parties either. Furthermore, it would be naive to blindly cast a vote for a candidate who vocally claims to be “Catholic.” Nor, as mentioned, can we vote for a candidate who may be right on lesser issues, but who does not hold a position true to the common good in matters of key issues. Essentially, it requires our efforts as Catholic Gentlemen to learn the political positions of our candidates and determine which candidate’s policies best align with the principles outlined in our Catholic moral and social teachings. In doing this, we fulfill our voting obligation. Often, local or national pro-life organizations will be able to provide a list of candidates and their stance on life-issues, saving us the need to each research for ourselves.

When the Choices are Slim – It may be more and more frequent that we find ourselves in a position where NO candidate aligns with our Catholic principles. In these cases, our first instinct might be to make a statement of our disfavor by spoiling our ballot or not voting altogether. Yet this may not be the best option in many circumstances. In these cases, a second option permits a Catholic to vote in order to limit the evil, which is a good action. In other words, we may vote for the candidate who is likely to do the least harm in hopes that the candidate who is likely to do the most harm will not win. In these cases our vote is not an endorsement of the candidate, but a means in an inevitable situation to reduce the evil. So even when our options are bleak, we may/must vote in a way that best serves the common good (or serves it least badly…). Often in hindsight, a third option would be to support and encourage a devoted, courageous, and qualified person to run as a candidate (or maybe even run yourself). Perhaps there are many Catholic Gentlemen out there who are being called to respond to serving the common good within the political arena.

Lastly, it is important to remember that our political voice can’t ever be silenced and shouldn’t ever be silent! Voting is only one way to express our voice of concern over the common good. It is up to us to keep our governments accountable to serving the common good both during election time, and at all times in between. This can be done by communicating with our political representatives directly, profusely participating in petitions, and rallying and informing people at our local level. Moreover, the lack of effort by our governments to truly serve the common good and the needs of the most vulnerable often falls into our hands, an immense task that we simply cannot set aside. Whether it is defending life, supporting a desperate mother, upholding marriage, or safeguarding the elderly, we, Catholic Gentlemen, must be at the leading edge of those who put the Church’s social teaching to practice, changing the culture one act of charity at a time!

Note to Canadians: We make our elections all about the party leaders even though most of us will actually never get to vote for them directly. We may then be torn between voting for a party and voting for a candidate. In principle, it still comes down to the candidate who will represent our vote and reflect our vision for upholding the common good. Therefore, political party is really secondary.

Sources and More to Read on Catholic Voting:

1. Doctrinal Note on some questions Regarding the Participation of Catholics in Political Life by the Congregation for the Doctrine of the Faith

2. How to Vote Catholic: A Brief Guide for Voters by CatholiCity.com