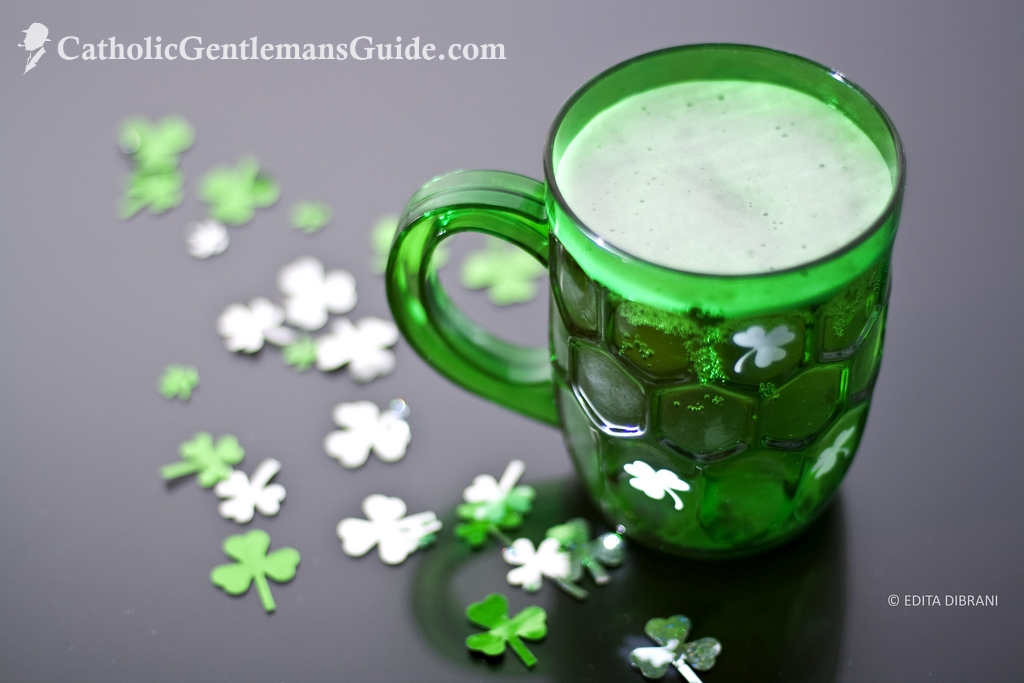 Saint Patrick, the Irish, and Lent are all to thank for popularized celebration of Saint Patrick’s Day (which is very much secularized, but undeniably Catholic in tradition). It is nice to know that the world wholeheartedly embraces this Catholic tradition, which just goes to show that the Catholic roots of the Western World cannot be denied. But I wonder how it is that a seemingly ordinary Catholic saint’s Feast Day has become a virtually worldwide celebration? My conclusion: The combination of Catholicism and the Pint (and of course, the Faith of the Irish)!

This holiday (from the Old English for holy day) would never have existed if one Catholic Gentleman living around the turn of the 4th century did not respond to his vocation to live and spread his Faith. Although there are many legends that have arisen over the centuries about Saint Patrick, a few of the facts seem to be that he was enslaved by the pagan Irish as a youth, he later escaped by Divine guidance, he became a priest and bishop, and then, by Divine guidance, returned back to Ireland to spread the Gospel. He devoted the remainder of his life to the conversion of Ireland to Catholicism. Needless to say, he accomplished this so well that Ireland remains one of the most Catholic countries in the world to this day.

Knowing this, Saint Patrick is a fine example for us, Catholic Gentlemen, of a quality that we might consider imitating: He loved his enemy so much that he would risk his life to give them the Truth. (And they’re so grateful for the truth that they would celebrate it, even to this day). Who is your enemy? Would you go to them out of love to offer them the gift of the Gospel? Saint Patrick is a saint because he showed Love, Courage, and Submission to God’s will – we are called to do the same.

Saint Patrick died on March 17, 461, thus the date of his Feast Day. March 17th was most certainly a Feast Day in the Catholic liturgical Calendar long before it was a holiday. And it was a Feast Day that was fervently celebrated by the descendants of Saint Patrick’s first converts, and rightly so. The only problem with March 17th is that it falls during Lent, the traditional period of solemn fasting and penitence leading up to Easter. So what is an Irishman to do? Well, it is actually Liturgically appropriate to celebrate a Feast Day during lent, as long as it has been assigned a date in the Liturgical Calendar. This doesn’t necessarily mean that we let the celebrations trump our Lenten sacrifices, BUT in cases where Saint Patrick’s Day falls on a Friday in Lent, Bishops are known to give dispensations from fasting and abstinence.

When it comes down to it, the Feast of Saint Patrick is a perfect reason to celebrate through merry festivities, a parade, some green porridge, and probably a pint or two. And so we have the popular holiday today. It is said that 5.5 million pints of Guinness are consumed daily. But on Saint Patrick’s Day, that number is nearly 13 million. Cheers to this Saint of Faith and evangelization, as long as we know that we also play a part in the same mission!

So when you have your pint, think of the Saint who loved his enemy enough to bear them the witness of Christ. Smirk in knowing that the world around you is celebrating the Feast Day of a Catholic Saint. And when you’re out with your fellows, why not pray “Saint Patrick’s Breastplate.” On Saint Patrick’s Day, experience first-hand how the Catholic Faith, the Pint, and the Cross really can go together (to quote Chesterton)! It’s been happening for centuries. CHEERS!

I bind unto myself today
The strong Name of the Trinity,
By invocation of the same,
The Three in One and One in Three.

I bind this day to me for ever.
By power of faith, Christ’s incarnation;
His baptism in the Jordan river;
His death on Cross for my salvation;
His bursting from the spicèd tomb;
His riding up the heavenly way;
His coming at the day of doom;
I bind unto myself today.

I bind unto myself the power
Of the great love of the cherubim;
The sweet ‘well done’ in judgment hour,
The service of the seraphim,
Confessors’ faith, Apostles’ word,
The Patriarchs’ prayers, the Prophets’ scrolls,
All good deeds done unto the Lord,
And purity of virgin souls.

I bind unto myself today
The virtues of the starlit heaven,
The glorious sun’s life-giving ray,
The whiteness of the moon at even,
The flashing of the lightning free,
The whirling wind’s tempestuous shocks,
The stable earth, the deep salt sea,
Around the old eternal rocks.

I bind unto myself today
The power of God to hold and lead,
His eye to watch, His might to stay,
His ear to hearken to my need.
The wisdom of my God to teach,
His hand to guide, His shield to ward,
The word of God to give me speech,
His heavenly host to be my guard.

Against the demon snares of sin,
The vice that gives temptation force,
The natural lusts that war within,
The hostile men that mar my course;
Or few or many, far or nigh,
In every place and in all hours,
Against their fierce hostility,
I bind to me these holy powers.

I bind unto myself the Name,
The strong Name of the Trinity;
By invocation of the same.
The Three in One, and One in Three,
Of Whom all nature hath creation,
Eternal Father, Spirit, Word:
Praise to the Lord of my salvation,
Salvation is of Christ the Lord.