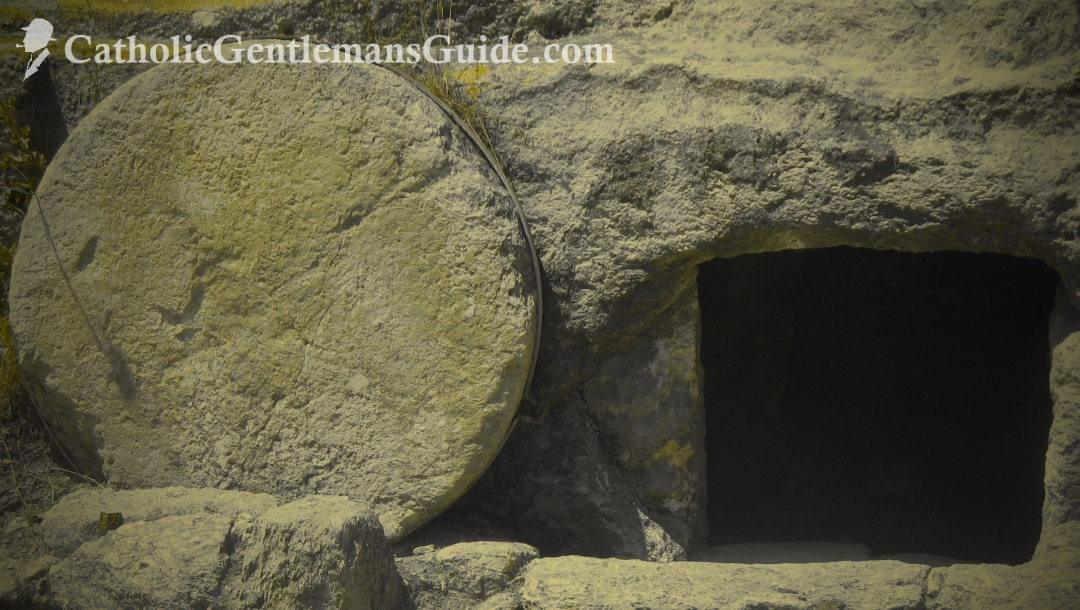 And very early on the first day of the week they went to the tomb when the sun had risen. And they were saying to one another, “Who will roll away the stone for us from the door of the tomb?” Mark 16:2-3

Clearly, the devoted ladies who went out to anoint Jesus’ body that morning thought they needed someone to roll away that heavy stone. Moving that stone was a man’s job. So if they had asked you, could you have moved it?

Well, you or I could certainly try. We could grunt and sweat. We might even grab a buddy, or employ some leverage mechanism. We’d probably do all we could to prove that we could do it. Yet, no matter how much brains or brawn we exert in our attempts to move that stone, our strength would NEVER move that stone to reveal an empty tomb.

The fact is, the ladies showed up and saw that the stone had been rolled back. Even more astonishing, the tomb was empty. Jesus conquered that stone just like He conquered the cross. Thanks to Jesus, you didn’t even need to pretend you were able to roll away that stone!

The stone was that last mocking symbol of death and defeat. It was the final symbol of darkness and sin’s apparent victory over Jesus. All appearances would tell any bystander that Jesus’ story was over and sealed up…But it wasn’t…On the third day Jesus turned the tables on sin and death. The stone, which on Good Friday seemed to be the decisive victory over Jesus’ life, became on Easter Morning the first proof of his Lordship over even death. Jesus conquered death. He walked out of the tomb. He conquered sin. By His strength and power, the stone was rolled away and the tomb was left vacant!

The stone can be a powerful symbol for us men of what we can NOT do with our own strength. The stone is the symbol of our own darkness, sin, and defeat that is too heavy to roll away by our own strength. What are the stones in your life? What sin and death remains in your life? How many times have we tried to conquer our sin with our own strength, only to find that we fall again and again? Even more grave, it might be that we’ve given up and given in to our temptation, weakness, and sin. Sometimes we might feel that our attachment to sin has created a stone too big for us or anyone to roll away. What is your stone? greed, anger, selfishness, pride, materialism, lust, unchastity, pornography, drugs, alcohol?

We can’t redeem ourselves (even though we might try to). Only Jesus, our Redeemer and Savior, has the power to roll away our stones, so as to free us from our own sin and darkness. Only He can forgive and only He can provide us with grace and with strength to overcome sin.

The Man’s paradox is this: We as men are strongest when we humbly exchange our reliance on our own strength for that of Jesus.

So, Are You Strong Enough?

Saint Paul would say: “I can do all things in him who strengthens me.” Phil 4:13.

A Catholic Gentleman would echo: “Yes, in Christ, I am strong enough!”