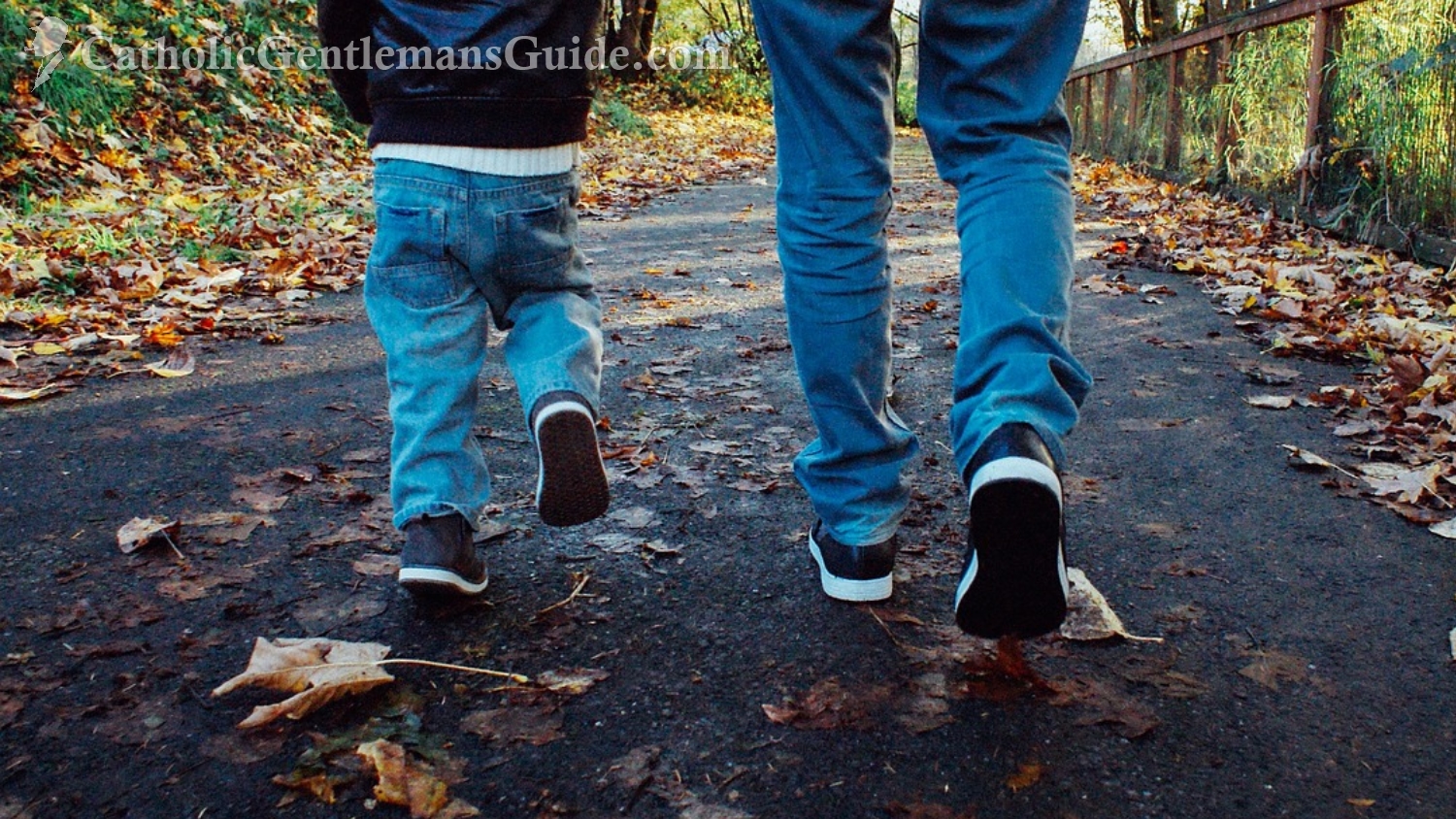 I’ve been looking forward to doing this interview for a long time.

Matt from CatholicGentlemansGuide.com is not only one of my best friends but a man I look up to in a big way. He’s wise, creative, and has a real heart for evangelization—and he knows how to appreciate a smooth shot of scotch mingled with the billowing aroma of pipe tobacco. It suffices to say he is very Gandalf-like in many admirable ways.

So finally I’ve been able to connect with Matt and get his take on a few key questions regardingapologetics in the home.

I value his insight on these matters because I have seen him in action both as a husband and as a father, and have witnessed his commitment to his family in everyday duties and as a spiritual leader in his household.

Furthermore, as one who spent several years of discerning the priesthood in seminary before getting married, Matt is able to speak uniquely to the critical factors in home faith formation that can better prepare our children to courageously discern their vocation.

Did you receive most of your faith formation at home or elsewhere while growing up?

Since I attended a rural public school, the only place in my elementary years that I received my faith formation was at home. Thankfully, my parents took seriously their role in guiding my faith formation from an early age. Many a Sunday afternoon, seated at the dining room table, you would find my parents guiding us through our grade-specific Catechism program. I still remember some of the lessons to this day!

Later, when I was in high-school, there were several influences on my faith formation. The primary source of my formation still came from home. By this point in my life I was enrolled in a Catholic home schooling program, so the faith was heavily integrated within all my academic subjects. Through my five years of home study, I remember studying the Baltimore Catechism from cover to cover, as well as studying scripture, Church history, morality, apologetics, and even having my first experience with an encyclical!

Outside of my home, I am eternally grateful for the faith formation we received in an amazing Altar Server program we had in our parish, spearheaded by a vibrant young priest. Later, as my siblings and I got older, we became heavily involved in youth ministry within our diocese. This gave us opportunities to make amazing Catholic friendships and to really put our faith into practice as we jumped into leadership roles and ministered to other youth.

Growing up, I was receptive to formation from both within the home and from without, and both were essential experiences for me. Looking back, the seed of wanting to know my faith was sown thanks to the guidance and direction of my parents, which ultimately inspired me as a young teen to consciously choose the faith as my own, and do my best to live it.

Was apologetics (whether the word “apologetics” was explicitly used or not) a significant component of your faith formation at home as a child or teenager?

My early formation consisted in learning “what” the Church taught. I knew a lot of Bible stories and I learned a lot of prayers. I knew Jesus loved me, I knew a few saints, and I knew I went to church. My Catholic life was so normal to me that I thought all my other friends and every other kid at school was being brought up the same way as me! I didn’t even know there was a title for “us” until I figured out I was “Roman Catholic” in grade 3 or 4. At this point in my life, I realized that not everyone was like me. Others had different faiths and beliefs (or none) and that’s when I began asking the question “why.” Why are there so many religions? Why is my Church more true than others? Why does my Church teach what it does? What would I be if I wasn’t born Catholic?

Apologetics wasn’t strictly introduced to me until high-school, but by then I already had a fair amount of confidence that the Catholic Church had been entrusted with the fullness of the truth and could always defend her teaching. Even though I didn’t use the term “apologetics” until high-school, I would say it was a significant part of my faith formation as soon as I started desiring further confirmation in my Catholic beliefs. From that point on, I suppose I gobbled up any ounce of “apologetics” that was included in my faith studies. My first full-fledged memory of explicit apologetics would have to be a book study I did with my friends on Catholicism and Reason, which really helped me see the beauty and rationality in Catholicism. From a fairly early age, I knew that everything in Catholicism made perfect sense. It all added up. I wanted to share it, so as a graduated teen, I would later study and use Kreeft’s Handbook of Christian Apologetics to organize and moderate debates on Catholic teaching and morality with two youth groups I was running at the time. As a teen, apologetics gave my faith rational confidence, which I guarantee is the same confidence that every fallen-away-Catholic youth never had.

Do you think apologetics are relevant in the home/family setting, both as something taught and as something utilized?

Apologetics is a critical and necessary aspect of faith formation, especially in our ultra skeptical world. Even so, apologetics is not the first step. I think that at least three things ordinarily precede apologetics in the home. The first is basic faith instruction that consistently leads to a deeper understanding of the faith, which may naturally lead to apologetics. The second is a household that lives the faith, Sunday to Sunday, through moral formation, prayer, the Sacraments, and virtue building. The third is an encounter with the living Jesus that occurs sometime during the first two. Then, inasmuch as the intellectual and rational capacities of a child develop and exist, apologetics can be introduced through good books, study, conversations, and Catholic media. In the right place, time, and way, there is no question about it, apologetics is a must within the home.

Unfortunately, many households fail to provide this deeper intellectual formation. If you grow up Catholic without apologetics, it is almost inevitable that you will come to a point where you realize that you’re just a Catholic who is “going through the motions” and you’re faced with three choices: (1) Keep going through the motions, (2) abandon Catholicism because it seems foolish, or (3) learn why you believe what you believe….and unless it is by God’s grace, the choice usually isn’t the third.

As for apologetics as something utilized in the family setting, I would say that it is inexcusable that today’s parents not take the lead in forming themselves in Catholic apologetics. The resources are just too easy to obtain these days. My own parents were not apologists and they never sat down and taught me apologetics. But because they were strong in their faith, they were confident in their Catholicism. They knew that the Church’s teachings were rich and full of truth, even though they couldn’t explain everything. They made an effort, even as busy parents, to study the Catechism and form themselves. They used the resources they had at the time (EWTN on shortwave radio and lots of Catholic audio tapes), and they made a noble effort while visiting Jehovah’s Witnesses, evangelizing lost Catholics, or challenging the occasional Protestant. My parents’ responsibility in forming themselves in the faith was great. My generation’s responsibility is even greater. Lucky for us, our Church is full of amazing apologists and ministries that defend Catholicism.

How important is it for fathers to be involved in their children’s faith formation?

I am certain I wouldn’t be the man I am today without the father I had. My mom’s role in our family’s faith can never be downplayed, but my dad took up the torch of faith as well. In my current niche of online ministry at CatholicGentlemansGuide.com, I’m often coming across resources and statistics about the incredible influence fathers (or, negatively, the lack of fathers) have on society. In terms of faith formation, my own experience confirms the findings of a Swiss study that essentially says that a father who actively practices the faith within a family will give his children the best chance of actually practicing their faith on their own someday. I’ve repeatedly observed this. Dad stays home and does not practice his faith, while faithful mom does her best to bring the children to Mass. It is no surprise that as her kids age, mom will eventually be coming to Mass alone.

A father’s influence is strong. Coming back to the rationality of apologetics, my own generalization is that masculine and fatherly faith tends to be more rationally based. When children, particularly sons, see their father convinced and firm in the faith, that in itself bears a strong and silent witness and proof of the validity of faith. If the father takes the leadership in prayer and teaching the faith within the home, even better. I’m proud to say that I had one such father. As a kid at the time, I didn’t know the effect he would have on the man I would be, perhaps he didn’t either, but the truth is, he did. Faithful fathers matter, and that’s part of the mission of CatholicGentlemansGuide.com.

How important was literature in forming you and your siblings in the faith and preparing you to engage the secular culture as committed Catholics?

It really boils down to beauty and truth. The literature we were formed with was largely classic literature, the works that have passed the test of time. This is less due to the influence of my parents, but more thanks to our schooling curriculum. So we were all exposed to the best works of all the great English and American poets and authors. There is timeless beauty and traditional values in the classics. The classics contain a depth and magnificence that is just hard to beat. And even though much of the literature we read was not “Catholic,” we were unconsciously practicing the skill of pulling out the beauty and the truth contained in the literature, and it to inspire and teach us. It is impossible for us to escape secular culture, but even amid the confusion, truth can be found if one has the eyes to see it. For us, the literature was more than just entertainment, it helped us decipher art and beauty, depth, richness, truth, which are all things that are found within Catholicism and the Catholic Church. I believe it is Peter Kreeft who proposes beauty as an argument for God’s existence. For us, the beauty and the valiant themes of literature helped to reinforce the God of our Catholic Faith. Sadly, many of today’s kids generally get their entertainment and cultural enrichment from video games, movies, and novels written as if they’re video games or movies! Unfortunately you’re never going to see the same depth or beauty in the next action flick. In my books, Ben Hur will beatHarry Potter every time!

Thank you Matt Nelson for raising these important questions and giving me the chance to respond. In the comments below, feel free to leave your own experiences of apologetics in the home. Finally, please check out Matt at ReasonableCatholic.com!

2 thoughts on “Apologetics In The Home: An Interview”